Notes from the Bunker #2: Return of the Baboon

Ain't no money in poetry, 'cause that's what set the poet free. Well I've had all the freedom I can stand. - Guy Clark

He who makes a beast of himself gets rid of the pain of being a man. - Dr. Johnson The best lessons are the ones you have learn over and over.

Most of the problems I encounter are entirely self-created. This is true for the majority of people. At the onset, the previous statement is not considered to be an especially sexy one in this day and age of the perpetual victim, the labeled and disregarded, the self-disenfranchised, and the botched afterbirth of an aborted american dream.*

It's true that the machinations of the dominant culture in these, the days final days of American Empire, are constructed on a model similar to the kind of economic Social Darwinism that grand designers like Milton Friedman, Henry Kissinger, JP Morgan and John D. Rockefeller saw as the only way to yoke the possibilities that absolute democracy present. The cards are stacked against the very myth our civilization ** insists on pushing on its people --


that hard work alone will create the success we believe we are entitled to simply because we are Americans.

This being true, however, does not remove from an individual the responsibility for learning how to act in, react to, and walk through the world.

One of the fundamental mistakes people -- usually the young, the inexperienced, or the naively optimistic (I've been all three, sometimes simultaneously) --  make at this point is to generalize and make some outrageous claim like

While it's always fun to play the Socio-economic Edition of Mad Libs, it's not especially useful. The
problem is that while we're all in this together, every single person has to figure out their own path to where ever it is they want to go. The truth is that the truth really is a pathless land.*** If you're walking in someone else's tracks all the time, you're trusting someone else's instincts to get you through.

My first mistake in ensuring my or my family's survival is signing away my self-sovereignty. I do this for a lot of reasons that are all well and good, and for a few reasons that are simply reactions to some deeply-embedded issues tied to my father's death and my sometimes tendency to look for father figures when I don't need one. On some level, I will never be sure Dad would be proud of me because I can't hear it from him.

When I feel my lowest, when I feel powerless, when I feel like an absolute failure, it is almost always when I allow myself to fall prey to that old issue.  When I doubt myself, I chain myself to an image of manhood that does not address the angels and the devils in my nature.

And when I walk through the world honestly and with power, I bring all of myself and I lumber through this world like a mad baboon. It's impossible for me to exist in the world without embracing my limitations and failings as much as I embrace my successes.When I ignore those things, a giant hole opens in my soul that swallows all of me. When this happens, I'm no good for anyone. 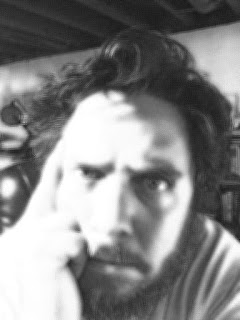 If you like what you're reading here, I have work for sale on my amazon author page:
www.amazon.com/author/mickparsons

Without realizing it, the individual composes his life according to the laws of beauty even in times of great distress. - Milan Kundera

Education is an admirable thing, but it is well to remember from time to time that nothing that worth knowing can be taught. - Oscar Wilde


This is the first fall semester since I moved to River City that I haven't had a single class to teach. When I went back to higher education I knew it was a safety move. Amanda and I talked about it more than once -- usually after the semester started to wear on me.  There was a point when I even thought that I could make myself happier as an academic worker by organizing with like-minded colleagues to address the problems I saw in the system: primarily, the exploitation of adjunct instructors as part of the corporatization of the last institution I could ever claim to love and respect.

Well, that didn't work out, for a variety of reasons that I have already written about (Check the archive from last year for the  rundown on all that.) Kentucky labor flirts with Right-to-Work legislation like a $20 hooker who gets her price haggled down to $5, and because the Kentucky legislature interprets the NLRA as including higher education academic workers as exempt from basic labor protections, I had no real recourse when the legal department at the Kentucky Community Technical College System ordered my firing and banishment from every single KCTCS campus in the state of Kentucky.

This time last year I was teaching at the University of Louisville, where, in spite of the fact that only 17% of the total budget comes from state education appropriations, everyone was worried about the inevitable impact of Matty Bevin's budget hack-n-slash.  I had a schedule, but I was increasingly isolated from semi-like-minded colleagues. The semester wore on me. The lack of action, or reaction, and attempts to push forward any labor actions to improve the plight of my fellow academic workers. The internal politics of "the movement" were a grind, too; and so I came face to face with the number one reason why organized labor takes it in the back more often than not:


the radical left eats its own in the name of pointless ideological disagreements.

Trying to manage a conversation or a planning session is, most of the time, like sitting through your basic department meeting.  Utter drudgery.

When the left is successful, they are because they set aside what can be considered deeply held convictions in order to focus on common goals and take on common enemies. Here in Kentucky, organized capital (READ: coal operators especially, but also corporate giants like General Electric and Yum!), with the help of now Senate Majority Leader Mitch McConnell, has done such an effective job of convincing the working class it doesn't need unions that there isn't a single union coal mine in the state and both GE and YUM! have been complicit in driving down wages and maintaining an anti-labor culture.

Academic labor here in the Commonwealth, of course, has an even deeper issue in that most academic workers -- adjuncts -- refuse to acknowledge that they are a labor force and demand the same rights that trade unionists have fought for and kept for generations.

My permanent separation from The University of Louisville, and from higher education, was inevitable. When I wrote about it, I pointed out I was not given the bum's rush like I was from KCTCS. One adjunct with a (justified) paranoid streak was not a budget priority. Then again, students really aren't the priority there, either, so it was not surprising.

I decided to walk away rather than let them leave me hanging in the perma-gray area of  "contingent labor." I haven't regretted that decision, though it does make for interesting conversational gaps with my father-in-law, who, to his credit, has not badgered me about my continued unemployed status.

I cast a lot of nets these days. I work on my writing. I am putting together episodes for my new podcast Alidade: an audio map, that will start dropping around the middle of next month. I apply for jobs at least daily, none of which will probably call me back because even though I'm qualified they see a decade plus of a career in academics and disregard the fact that the first thing a neophyte scholar learns is how to learn. I'm exploring the limits of my incompetence in regards to general home repair, plumbing, and small engine repair.  The garden has been producing a lot of peppers and okra this year, and we're making plans to expand and alter our garden plans next year. We managed to go camping once this summer and I'm hoping to get out again before it gets too chilly. I've honed my backyard grill master abilities, and I'm on a regular workout routine. I build my life around embracing beauty and truth and creating a deeper and more meaningful connection to the larger and smaller world.

I miss teaching sometimes. But mostly, I like what I'm doing. When I say I feel like the institution of higher education betrayed me, I'm not talking about KCTCS or my decision not to allow the University of Louisville dictate my life to me. There was a time when a college campus was a safe space for me. I thrived there in many respects. I gained more than the education I went to get, and I learned more than I probably taught when I was teaching.

The institution broke faith, but not just with me. They've broken faith with everyone -- with students, with full and adjunct faculty, and with staff.  And I don't really believe there's anyway to fix it from the inside, especially when the largest part of their work force keeps its collective head down and accepts being exploited as the price for being a "professional" instead of a "worker."