from Record of a Pair of Well-Worn Traveling Boots: Be Safe Out There [a brief ethnography] 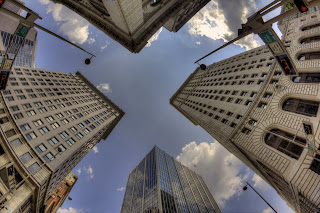 The middle-aged black man was wearing a blue suit coat that was too big for him, worn around the cuffs, and missing a couple of buttons. It was October, and after dark, which meant it was a little chilly. His clothes under the blue coat were rattier than the coat. Tired flipflops left his feet exposed. In his hands, he held an empty baby bottle. He approached me after I finished pumping gas. Debit cards weren't a thing in those days, and neither were card readers on gas pumps. But in that part of the city, near the university and Short Vine -- another area I ended up spending a lot of time -- you walked in and paid before you pumped. And I've always preferred cash transactions, anyway --chalk that up to my small towniness.

The town where I'm from isn't remote or isolated in a geographic sense, but I learned early there are other kinds of distance, other types of geography that are difficult to cross -- especially when it's crossed under duress. And truthfully, crossing the distance between where I'm from and where I have ended up wasn't so much a problem for me. But it took me a long time to figure out that there's no going back. Not really.

Cincinnati was the first place I escaped to when I got my driver's license. It was the closest city, and the nearest place of any size. And though I didn't mean to end up there, necessarily, I ended up in a part of town that I would, and do, return to: Over the Rhine. In those days, Vine Street was still an open market for pretty much any illicit thing you could want. Not that I tried any of it; I still had a healthy dose of small town naivete that, for good or bad, managed to save me. But I did witness my first drug deal and accidentally walk up on a sex trade transaction. All the parties involved were amused by my small town whiteness -- amused and too busy to punish me for it. Because while Cincinnati was a dangerous place, and while OTR was probably the place furthest from where I lived -- for a whole host of reasons -- it never once occurred to me that I might have been in danger. I explored it with an anthropologist's curiosity -- and detachment -- that has served me well over the years, no matter how deep I dived or how close to the bottom I got.

He started in by telling me he wasn't just panhandling. He was passing through, he said, pointing directionlessly towards the interstate. His car broke down and his wife and baby daughter stayed with the car because it was chilly out. He waved the baby bottle at me as proof that his story was true. In the moment it didn't occur to me that he might just be hustling for drug money; it did occur to me that he sounded too practiced to be in moment. Growing up as I did around a few truly ineffective liars, I had started to pick up an ear for that sort of thing.  But also, in that moment, I didn't care. I don't know if it was the dedication to his story, or the flip flops. But I gave him a few dollars, wished him luck.

- Be safe out there, I said. And then I got in my car and left, traversing the various geographies back to my hometown, where panhandlers were prime time television extras, where the poverty was just as palpable, but somehow different. A place I would not be able to look at in the same way, or ever really be able to stay -- though at the time I wasn't aware that anything in me had shifted.

I think about him often and wonder whatever happened to him. I see him in every face I've met doing outreach. I've revisited that moment hundreds, maybe thousands of times over the years. And while I don't know if that was when it all changed or when it first occured to me that something had, I'm forever grateful that he crossed my path.

Please check out my work for sale on Amazon.

You can also throw a little in the tip jar:
Posted by DirtySacred at 3:31 PM
Email ThisBlogThis!Share to TwitterShare to FacebookShare to Pinterest
Labels: A Record of a Pair of Well-worn Traveling boots, Be Safe Out There, Christianity, Cincinnati, geography, life lessons, naïve, Over the Rhine, small town, trajectory, travel, youth
Location: Louisville, KY, USA
Newer Post Older Post Home