From Field Notes: Home and desk: a reflection on context and etymology 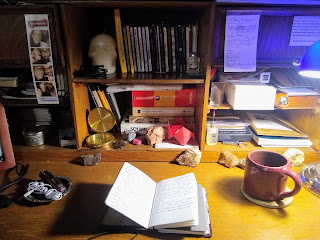 Back to the desk. Yes, I still have my workstudy. And school to finish. And I have no clue how I'm going to make any money after the first of the year.

But I need to be here. I almost avoid it when I'm in the midst of a job cycle. I mean yes, I still write. I'm always writing, eeking out some words here and there. But the desk is as much about reflection as it is the act of writing and on the job -- where it's important that I stay in the moment in order to stay on task -- it's difficult to find time to reflect. Meditate, yes. But not reflect.

And so here I am. Nina Simone on the speakers. Coffee nearby. Dogs Lounging around my chair (for now.) Yesterday's rain is gone, but everything outside is cold and damp to the bone. We're heading out for Chicago early Monday morning to catch Amtrak's The City of New Orleans down to that city.

I left New Orleans in November, almost 20 years ago, running for Kentucky. I loved the city and was starting to make a pretty good home there. Had a job I didn't hate, friends, and I was about to find an apartment somewhere that wasn't the roach infested rooming house I'd been living in on the corner of Palmyra and N. Jefferson Davis that had been a trap house before the city shut it down, sold it to a fly-by-night management company that didn't even bother to slap some new paint on it before renting it out. I felt at home there in a way I'd never felt at home before. It's one of those cities that gives you the space to reinvent yourself or takes you as you come; it doesn't tolerate fools, but it will, generally, try and embrace them anyway.

Home has always struck me as an odd word with an odd weight. It's an Old Germanic word, at the root (heim, pronounced hām) that describes a spaces where souls are gathered. Contemporaneously, people associate with four walls (at a minimum), a roof, a door, and a window (at a minimum.) The gathering of souls is not required by the strictest definition, and this is best described by the term used to describe an opposite state of being: homeless.

A person described as homeless is someone without secure shelter; the legal definitions vary based on who wrote the statute and whether HUD money is attached to a particular housing program. For example, sleeping in your car is generally defined as being homeless, and so is sleeping on a friend's couch for more than a month. But cities tend to define homelessness based on the proximity of people sleeping outside to the centers of business and tourism. That's in practice, anyway, even if it isn't how they describe it in legalese. In practice, the operational definition of being homeless is applied in direct proportion to the person or people in question's distance to commerce. If that bothers you or strikes you as wrong, that's the correct response for a human. If your reaction is "Yeah, but..." you might be a politician, or genetically related to one.  If you have no reaction, you're either a cop or a member of your local Chamber of Commerce.

When I moved to New Orleans, it was the first place I ever went that I didn't have a plan, didn't really know anyone I'd call a friend. I slept on my ex-wife's couch for a week in Lacombe before I found the rooming house.  Interestingly enough, my first ever Greyhound trip was from New Orleans, back up to Lexington, only to return to that city of dreams on the bus. Before that I'd slept in my car before, slept on friends' couches. I didn't think of myself as homeless because I always had a sense of where I was and the periods of solitude were always punctuated with the company of friends.  Living in New Orleans transformed me in a lot of ways; it taught me that I could survive and that I had a definite survival instinct in spite of my sometimes unhealthy behavior and deep swings of depression. It also taught me that I had find a different mode of self-definition besides the usual economic markers that had convinced me I was a failure.

I'm lucky now to have a home -- that is, the company of a soul. There are people who live much better, economically speaking, who can't say that. And I'm looking forward to revisiting my city of dreams with her on the train I used to watch from my car in the parking lot before work.

Notes on "Locked inside the Difference Machine and other opus erratum" 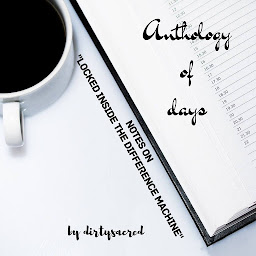 "Opus operatum" translates as "the work wrought." I like that word: wrought.  I haven't generally feel like my poetry is, for the most part, something that IS wrought; but I've always liked the idea. It makes me think of my grandfather's hands, the hands of a carpenter, and the way he always smelled of wood shavings and nicotine.  Wrought like I imagined the way cars, trains, and airplanes were made; wrought like the real swords I pretended stick were in endless, imaginative games. Wrought, something beaten our or shaped by hammering. It's one of the crunchy words that gets used to describe masculinized creation. Nations are wrought. Industries are wrought and do themselves take credit for what people's hands make. When poets speak of poetry being wrought, it's mostly in a masculine sense; and as I mention, I like the word because it's chewy and because of the idylls it creates when I turn it around in my mind.

But poetry for me isn't  wrought. Not wrought, not wrangled, not forced, not carved, not fought for. It's not drip and dribble inspiration from the muses.  It's also not something birthed; not because I think a poet necessarily needs a uterus to birth a poem, but because that's not ever been my experience with language. And when I read poets speaking of their work... and sometimes worse, when I read people writing about someone else's poetry... the verbiage is generally an active one.  It's like we have to somehow justify the truth that writers spend a significant amount of time sitting down, or maybe trying to contradict the trope of the physically ineffectual wordsmith, or maybe it's an attempt to articulate the sensation of writing to a reader who maybe hasn't had the experience.

The problem with metaphors about writing is that eventually all metaphors break down.  Even (and especially) the good ones.  After so undetermined and trope specific amount of time time has passed, even the best metaphors need their context explained in order to truly make sense. The same is true of movies, and of a large amount of music.  This break down explains why "To thine own self be true" is almost always treated as a self-affirming mantra and why Romeo and Juliet is still seen as a soppy love story. And if ol' Billy Shakespeare isn't immune, NOTHING is.

The Difference Engine -- what amounts to the first ever computer, was created by Charles Babbage in 18. And although now it's just a calculator that's far too big to fit in your hip pocket to help figure out the percentage amount of a tip, this it's one of those inventions that has transformed the world we live in. And most people -- many of us who use computers daily whether we like them or not -- don't even know his name.

I bring this up because outside of a certain context, Babbage's mechanical brain is easy to dismiss. So to is the fact that automatons (read: robots) are recorded as having existed long before the 18th Century, when they were popularized in Europe... some accounts even written about in ancient China (400 BCE).

There are people for whom poetry is just another difference engine, or, like Jacques de Vaucanson's Flute Player (1737) is nothing but a curiosity.  I find most people who don't like poetry either weren't introduced to it with the appropriate context or dismiss it because it's not generally something someone does "for a living." Making money as a poet usually means doing any number of things, and in a culture driven by neoliberal capitalism, what a person earns ends up being more important than what a person does, what they make, or what they create.

I think of myself not as someone who wroughts language into poetry but as a lens. The world passes through me like light through a lens and what poetry comes of is nothing but refracted lights and images. This metaphor, too, is breaking down -- like Babbage's machine, the legendary Yen Shi's artificial man, or King Solomon's throne (in some writings described as an ivory and gold mechanical wonder.)

Read this installment of Anthology of Days here.