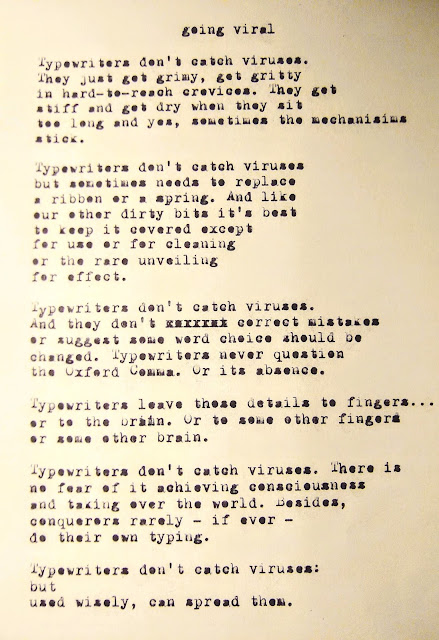 Thanks for reading! If you like what I'm doing, please consider leaving a tip. It helps keep the lights on. Thanks again!
Posted by DirtySacred at 9:30 AM
Email ThisBlogThis!Share to TwitterShare to FacebookShare to Pinterest
Labels: lanugage, poem, poetry, typewriter, viral, virus
Location: Louisville, KY, USA

____preferred ball caps. Some people later referred to them as “trucker caps.” The only other kind of hat ___ ever saw ___ wear was blue wool Greek fisherman’s cap; but __ only wore that one when it was cold outside. Regardless of the hat, __ always wore it the same: placed atop __ head like a crown, the brim bent just enough so it would sit comfortably against that large forehead.

___ was the only person__ saw who wore hats that way. Not even the old farmers, the few who were left and clinging onto what land they had left until the final crop was planted and their kids sold the acres for housing developments. Their hats were clamped down on their skulls, prepared for the storm.

2.  there and back again

__ keep circling _____ , back around to meet _____  anew. Keep circling back on these poetic roots: Whitman, Kerouac, Basho, Thoreau, HST… then onto Li Po, onto Tu Fu, and on and onto the mad Zen poets like Ikkyu. ___  keep circling back to the original schism, the original sin that split poetry from itself like Cain split himself from Abel.  ____ knows they are road signs. ___ knows by the signs ___ is going the right way.

_____ , grad student, anonymous preeminent post-modernist, slaughter house scholar, and maybe the 2nd most subversive person ___  ever met once proclaimed that “Kerouac’s open road has been converted into a warehouse.”  25 yrs later, shambling as ___ is , trudging as ___ is , circling back as__  is only to find ____  on the road Kerouac mapped. Mapped, but did not create.