______ sold the wedding ring for $40 and was later disappointed it didn’t go further in getting ___ drunk. The pawnbroker acted bored and barely even looked at the ring, handing it off to his underpaid lackey, a sallow-eyed and slightly punch-drunk brunette, to weigh it. ­­­____ tried to meet the lackey’s gaze, mentally asking her to put her finger on the scale. It was clear when she brought the ring back that she didn’t. The pawnbroker spit out his offer and added, “I can give you a deal on a .38. There’s a waiting period, though.” The last part was almost sympathetic.  Naturally ­­____ refused the gun and pocketed the cash, hoping the punch-drunk lackey found a way to pocket the ring. Or the .38

Thanks for reading! If you like what I'm doing, become a Patron!
Posted by DirtySacred at 11:26 AM
Email ThisBlogThis!Share to TwitterShare to FacebookShare to Pinterest
Labels: #4, fictions, flash fiction, pawnbroker, Redactions, shorts, wedding ring
Location: Louisville, KY, USA

From Field Notes -- Lauds: Procession to the Long Night Moon 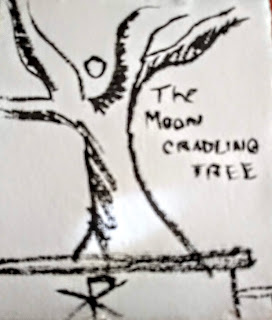 Wednesday, from The Abbey of Gethsemani, Trappist, KY:  Instead of observing Lauds and Mass this morning I came down to the cafeteria to sit with my coffee facing the windows that look out onto the patio that leads to the garden. On my way downstairs (where I was planning on staring out the window, anyway), the moon caught my attention through a window near the top of the stairs; the moon shined bright and hung low over the abbey. I decided to catch more of it because it was a crisp, clear, and cold moon. A December moon. And  with sunrise not until almost 8 AM, she would hold sway in the pre-solstice darkness.

My thoughts wandered, as they often do, wandering into wondering about ... well... my wonderings. My ruminations. And I found myself pondering the plusses and minuses of the contemplative life that Merton wrote about so eloquently. I can't be, nor do I have the desire to be, a Religious. But what about the notion of being a "secular contemplative"?

I had just read an article online about this, but the solution laid out there was to teach... an option I don't really have and, if I'm going to choose poverty in order to be able reflect and write,  I'll choose straight poverty and not sign up to be exploited.

Then there's the whole being in one place thing, which seems to be common among contemplators of various ilks and ordinations. But I think I try too hard to place contemplation and restlessness in opposition, even though I know in practice this isn't so. This tendency is World-bound thinking. Machine Thinking. My Ego, my enemy, still tries to set me in opposition to myself.  Merton maintained that "contemplation is dangerous" if only because the world at large tends not to understand the need for it.

Merton's thoughts on contemplation remind me of Heidegger's fears about calculated (machine) thinking -- a product of the industrial revolution -- causing humanity to reject what makes it human: the ability to reflect. Reflection and contemplation is a large part of what gives meaning to people's lives. How we think about life is what gives life  meaning; and without contemplation, without reflection, people deny themselves context for their own experience and have no choice to rely on some other, inorganic framework.

As usual no answers presented themselves. And probably, that was the answer anyway.
Of course, my nature has always been bent towards the contemplative, just as much as it's always been restless. This is what it means to be a dreamer. And I have most definitely always been that. Unapologetically.

I sat and watched the moon slip from the cradle of two giant arms from the oak tree out and to the other side. Even with the moon hidden briefly behind the tree, it's halo glowed like something out of a Renaissance painting.  Mars was stil visible... at least I think it was Mars... but as I left my monocular back in my room and couldn't retrieve it without crossing the balcony during Mass, I can't even get a minimal look at it. But I know it's there, orbiting the sun with us,  unobstructed by light pollution as the moon peaked out on the other side of the exterior limb: rounded, glowing. Beatific.


Wide-eyed dreamers:
we end up either
restless moon chasers
or bitter failures.

Spontaneous Nothing/ Done getting kicked

The aftermath of every major life decision is that my brain, my  old enemy, kicks out every single reason that I might have read the road signs wrong. Like as I might, blaming this on alcoholism doesn't feel like it fits the bill. Yes, our brains are our enemies most of the time... the brain as controlled by ego, at any rate.

To wit: faced with an unexpected 40% tuition increase from last semester to this semester, I decided it wasn't right to put that kind of strain on my family's already thin finances. The financial aid office, in all it's wisdom, offered me the opportunity to apply for yet another loan that I probably wouldn't get. If I had gone out to LA to deal with the issue in person, I'd have had no money to pay for lodging and no sure way home ... unless my wife and I didn't pay the mortgage.

See what I mean? Untenable.  Add to that the fact that the additional loan I was "qualified to apply for" was a PLUS loan... which is essentially a bank loan.  They check your credit score for that one.
So I didn't go. I was able to get a Leave of Absence for financial reasons, but that means I'll graduate a semester later than I originally planned... December instead of June 2020.

Meh. That part I'm not all that bothered by. A little bummed that I won't get to graduate with my friends in the same cohort. But it's that ol' brain... my Ego... that's been kicking my ass over the last few days.


Well, fuck you Ego. And move over.

This self-questioning has been a paralytic in the past. My joints lock up. My brain turns into an old rabbit-eared idiot box permanently stuck on white noise.  Generally this happens while I'm mid-stride into some half plan or another. Except that this time I had a plan, even if I'd forgotten that my old enemy, ego mine, would try and get in between.

I'm pretty sure my wife doesn't want to know this, and I'm damn sure certain that every productive member of the Machina Trumplandia doesn't want to know, either. Nothing flies in the face of that Engrained Something we were taught from the moment our parents started trying to socialize us.  My mother will worry. My mother-in-law, too. Pretty sure my daughter, who is preparing to have a daughter of her own, will have some concerns. If my father's ghost is hanging around, he'll have some choice words on the matter.


But yeah. Nothing. One Big Spontaneous Nothing.

That Engrained Something... that's ego. That's all my previous lives and decisions trying to run on repeat.  But like a religious has to die to their old life, a poet ... to truly be one... has to die to his or her old life, too.  While I have a deep respect for The Grand Experiment*, I've (finally) learned that there is no such thing as finding an accommodation between poetry and "life."

Poetry IS life. And there is no accommodating life. Either you live or you don't.

I know what you're thinking. What about money? What about bills? Yes, I will need to  make money. My decision to try and go back for my MFA was predicated on the notion that I had to find another track to be a good husband. My decision put off going this residency because of the financial hardship it would drop on my household was based entirely on needing to do what's best for my family. Not my ego, which would have had me going out to LA and putting our domestic security at risk.

Now, it's true that I've done a lot of things to earn money. Nearly all of them were awful. I attribute this to the fact that I've always hated money.  Even when I thought I was engaged in my own little capitalistic experiment ... and doing pretty well at it, actually... the thing I was sacrificing kept kicking me in the nuts. Poetry. Poetry kicked me in the nuts. Life. Poetry ignored is one big game of Roshambo, South Park Style.


I'm done getting kicked in the nuts for you, Ego.

*The working idea that a poet can balance poetry, professional, and domestic life. I'm not saying it can't work. I'm saying it doesn't work for me. I was born with rambling feet, but I'm a lousy dancer.