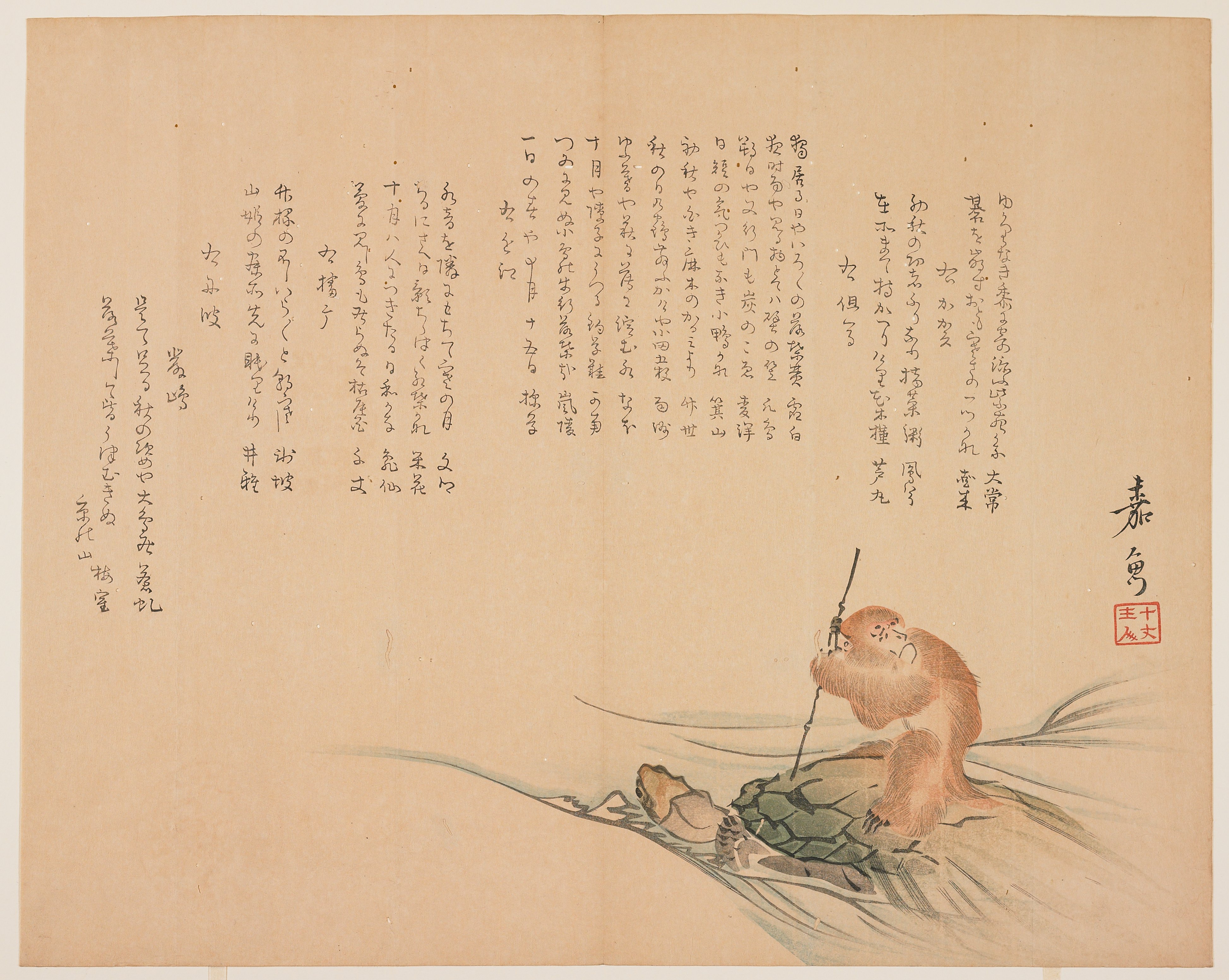 Compiled in the early 12th century, Konjaku monogatarishñ, or the "Tales of Times Now Past" is an anthology consisting of more than one thousand tales form India, China, and Japan. This print illustrates a scene from the story of a turtle who tried to kill a monkey because he heard that monkeys' livers are effective medicine. The turtle invited a monkey to his place telling him that there would be lots of delicious food. Anticipating the feast, the monkey climbed on the turtle's back to cross the ocean. When they were far out to sea, the turtle revealed his true intentions. The clever monkey then confided that he had accidentally left his liver hanging on a tree branch on the shore. Tricked by the monkey's claim, the turtle returned to land, where the monkey quickly scurried to safety high in the tree. Despite their adversarial roles in the story, the turtle and monkey in this print look to be friendly, thus giving the image an overall bucolic ambience.

I offer this image from a 12th Century manuscript and short explanation from the archive notes just to add a bit of context. Hopefully it will make sense by the time I'm finished with this post.

During my morning meditations a while back, it struck me that I am a baboon riding a turtle. I'm still unwrapping what all this metaphor means, but if I'm being honest this particular revelation didn't come as a great surprise. A few years back I started a long series of poems, many of them unread except by me and most of them probably not all that good, in which I wrote myself as a baboon. The phrase BABOON LUMBERING, or at the very least the image of it, was a central theme of those poems. It best described how I felt in the world.

Although my formal education is relatively extensive, my self education really began while I was still traversing  high school. I'm sure I went to classes my senior year, but I don't remember much of that year ... the year my dad died. What I do remember is spending a  lot of time in the very small high school library, obsessed with these dusty old books on the reference wall that no one ever paid any attention to. There was a huge series... maybe two or three encyclopedia sets long... of THE GREAT BOOKS. The first volume covered the major writings of Aristotle. Of course I didn't start there. I started with Descartes and The Scientific Method. I don't know why I started there, except that in the early time of mourning Dad's death, I found the religion I'd grown up with to be little or no salve. So maybe, I figured, maybe science will offer something else.

It didn't. Not really. But it did start to give me framework with which to view the world. There are two major element to the Scientific Method that matter here and now: evidence and observation. Although I'd done ok in school (I was a lazy student) I don't know that I ever learned anything about oberserving. And it was through the process of reading Descartes, Bacon, Plato, Aristotle, Socrates, and as many other of The Great Books as I could read, that I began to understand the difference between just SEEING and actually OBSERVING.

That lesson has been instrumental, and has shaped me into the writer, the thinker, and the spritutal and metaphysical person I am. That lesson continues to shape my journey because at the core of it is the belief that I am not just here to SEE. I am here to OBSERVE and to write it all down as honestly as I can.

Monkeys and baboons in various mythologies are storytellers, messengers, and tricksters. And while my choice of BABOON LUMBERING had more to do with my general discomfort in the world at that time, I am starting to see that my brain keeps kicking this image back at me for a reason.


And so, here I am. Still lumbering, but more at ease. Experience and observation. Detachment (a kind of empiricism) also comes into play. But I'll save that for another time.


If you like what I'm doing, please consider leaving a tip. It helps keep the lights on. Thanks again!

A Tip for Traveling Well (Back in the Tall Grass)

The top level of Iroquois Park in Louisville, Kentucky is one of the most beautiful places I've ever been. It's only open to motor traffic one day a week, and most of the time it looks like the city has all but forgotten about it: tall grass, hidden brambles, vines, and flowers. The path through the tall grass eventually disappears and even though the earnest saunterer isn't that far from the road or from civilization, the wildness of the place takes hold and for a moment, it's possible to forget the nearness of  what has come to pass as civilization.


One of the blessings of my life is that such a place, and others like it, are so close to where I live. I've taken this for granted in the past because, well, my head wasn't quite turned right. I'd allowed myself -- with all the best intentions in the world -- to get distracted by work, by the demands of building a business that I built for what may have not been the best reasons, and by the trappings of a civilization and system that I'd spent years avoiding and actively fighting against.

But as I find myself back in the tall grass, having wandered off the marked path in favor one that I

have no choice to have faith in rather than the sure thing I can see, dictate, and, to a limited degree, control, I feel more free than I have in a long, long time. I was so busy trying to make up some kind of professional life after the one I loved (education) seemed to have left me behind... or, to be more accurate, filtered me out... that I missed the opportunity to really step off the path. Yes, I tried a few creative things until I put together some sort of business plan. But the business took all the energy and left me little room to breathe. And you may point out, Isn't that just the way it is?

No. It's the way I decided it was. That doesn't mean it was true. And no one had any control over it but me. I'd trapped myself in a maze of my own creation, with a monster of my own creation to whom I ceded all control of my life.

When I was finally able to see... or I was blessed with the chance to be able to see... what I was doing to myself, I knew that I had to get back to something basic:

On any journey, the things you carry are the things that can both help sustain you and make your life miserable. In some cases, the thing you're lugging around will kill you if you let it. So let go of what you don't need. Hang onto what sustains you.

The real bitch of it is that only you can figure out what those things are. But once you do, the tall grass is calling.

Thanks for reading! If you like what I'm doing, please consider leaving a tip.

It helps keep the lights on. Thanks again!