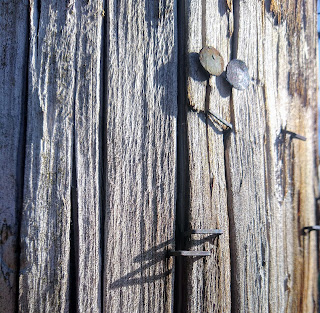 This was back when I still believed going to meetings, secret or otherwise, could change the world: at one such meeting, I once offered up the idea of creating a non-digital communication network. This could mean a lot of things, of course. It could mean drops in pre-arranged places. It could be a hand to hand messages. There are other options, but the general idea was to create a alternative network in the event that internet and cell signals were blocked. This was not so far outside the pale in the post-democracy century. Not then and not now.
Even so, my suggestion was greeted with derision. I was laughed at and dismissed as being out of touch. One especially catty child who had just gotten done being very excited about their amazon.com purchased body armor made a crack about me needing to get back to typewriter and evening paper.
"As if there's still an evening edition," said I.
Flyers posted to wooden poles were the standard public bulletin board long before listservs and the social media beast that grew out of them. Mimeographed -- then photo copied flyers for concerts, rallies, political statements, layered upon one another in a tapestry of all that was happening outside the prevue of the newspaper classifieds no one could afford.
Another key component of this pre-digital communicative tapestry was the stapler, which was first patented in February 1879 by George McGill. The stapler as we think of it -- the four way paper stapler -- came into existence in 1941. The precursor to the modern staple was called into being by King Louis XV in 1866 after wanting a better way to tack papers together. The first actual stapler was then created, but then later patented by McGill then put into production by a man named Gould.  The term staple originates from the late 13th century Old English stapol -- which means post or pillar. All this is just to point out that from its very creation, the staple was an innovation designed to further communication... and certainly, on a linguistic level, the staple and the wood pole have more than a passing relation.
The stapled flyer eventually came under assault by utility companies, Home Owner Associations, gentrifiers and others who strive for a planned and ordered society in which everyone mows their yards with perfect synchronicity. It's now illegal in most places -- and strongly discouraged in the rest -- to post signs on public or private property (cough cough utility company property cough cough).
Futurists contend that we now have this great massive beast-bitch on a leash, social media. Bands don't need flyers. Just set up an Event! And while there's been no study about which method is more effective, long-time labor organizers and musicians have told me there was a larger turn out with flyers than they ever get with Events. And any social media marketer will tell you -- if they're being honest -- that the most you can expect from posting an Event about your event is 1/3 attendance ... and that's from among the ones who affirm that they are "Going." The return on Facebook ads is even lower -- no matter what Facebook tries to sell you.
So then, what about the communicative tapestry? Well it's all digital, for one, which really only lends the illusion that it's less chaotic. Thanks to predictive algorithms, you're pretty much only likely to see more of the same on your social media feeds. Whatever you looked at yesterday, last week, last month... that's what you're looking at today, tomorrow, next month, and next year. It only changes when you actively change it by changing search terms or by liking different things.  So the tapestry is more like dental floss... you get waxed and mint flavored until you decide to try unwaxed or unflavored. It's peanut butter. It's like every other product we buy or use... including in the way that we use or purchase is then collected and rendered and used to predict (and hence) subtly change our behavior.
But it DOES have that curb appeal we're supposed to strive for. No muss no fuss. All straight lines and simple connections on discrete and personal hand held digital doorways. Like my first ex-wife told me before we divorced, what it looks like on the outside is all that matters... right?
I wonder what they'll say when the digital ware is worn, not carried and the ads pop up as we walk by someplace the fine-tuned algorithm informs us is like something we've liked or been to before. I guess there's always the "Opt Out" option... or is there?